15 Exceptional Print Ads to Inspire You to Create Your Own 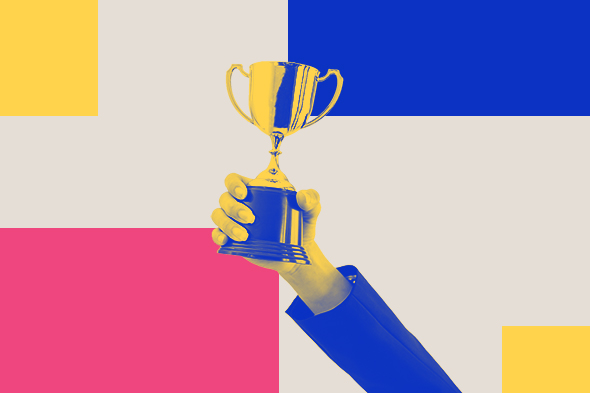 The Best Print Ads of All Time

1. What makes a good print ad?
2. The best print advertisements of all time
3. Final thoughts
0%

In a world where advertisements are all around us, it takes a special one to capture attention. But every once in a while, there’s one that makes you stop and stare, look twice, or maybe even burst out laughing. Here’s the lineup of the best print ads of all time.

Living in this increasingly digitalized world, you may wonder: are print ads still effective? We’re here to tell you that they most definitely are.

Time and time again, statistics prove that a good print advertisement can capture your audience’s attention, boost your brand recognition, and form a bond between your brand and its target audience.

Find out how to build a strong and unique brand

Download our guide to learn all about branding and visual identity

What’s more, is that well-executed print ads combined with digital advertising can boost your campaign’s effectiveness to 400%.

The facts are all there, so the time to jump aboard the print train is now. But creating a print ad is easier said than done.

What makes a good print ad?

Of course, print ads only work when they are good. Scrap that - when they are amazing. A print advertisement is tricky since it’s not like you can adjust anything once it has been printed.

We wish we could tell you the standard formula that leads to an amazingly successful print advertisement, but unfortunately, there is no such thing. It’s all about being clever with timing, space, and your message.

One way to determine what makes a good print ad is by analyzing those that have done an exceptional job. The ones still floating around the internet, praised for their creativity. Here are the best print ads of all time.

The best print advertisements of all time

If you think of rivalry between two brands, chances are Pepsi and Coca-Cola come to mind. The two have been going head to head, selling their drink in clever ways, and they both have numerous famous print ads to their name.

The ingenious ad below was created by Buzz in a Box, a Belgian advertisement company. It’s a hilarious and cheeky provocation aimed directly at Pepsi’s biggest competitor, Coca-Cola. 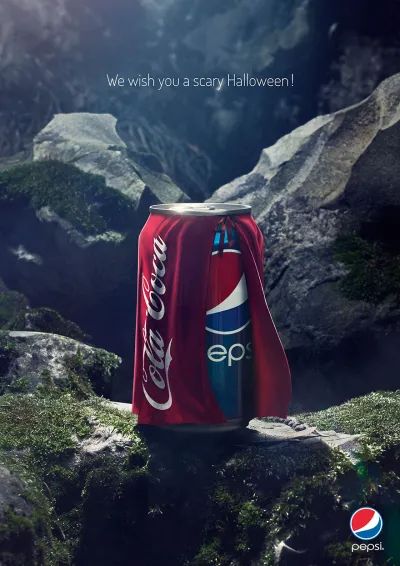 Image via The Ad Digest

This ad works for numerous reasons. It’s funny and therefore doing a great job at evoking emotion from its audience. You can instantly see what this advertisement is about, making it easy to digest. Last but not least, it’s seasonal. Holidays are great opportunities to attract attention and sell more.

How To Prepare Your Business for the Holiday Season

We all know the feeling of needing a holiday. Kielo Travel captured it perfectly in their print advertisement below.

The visuals show that you’re looking at an office. It’s full of binders, paperwork, and other serious stuff. But in that office, there’s an employee dreaming of a holiday. How do we know? The doodles that suddenly make a dull binder represent a turquoise swimming pool somewhere sunny. 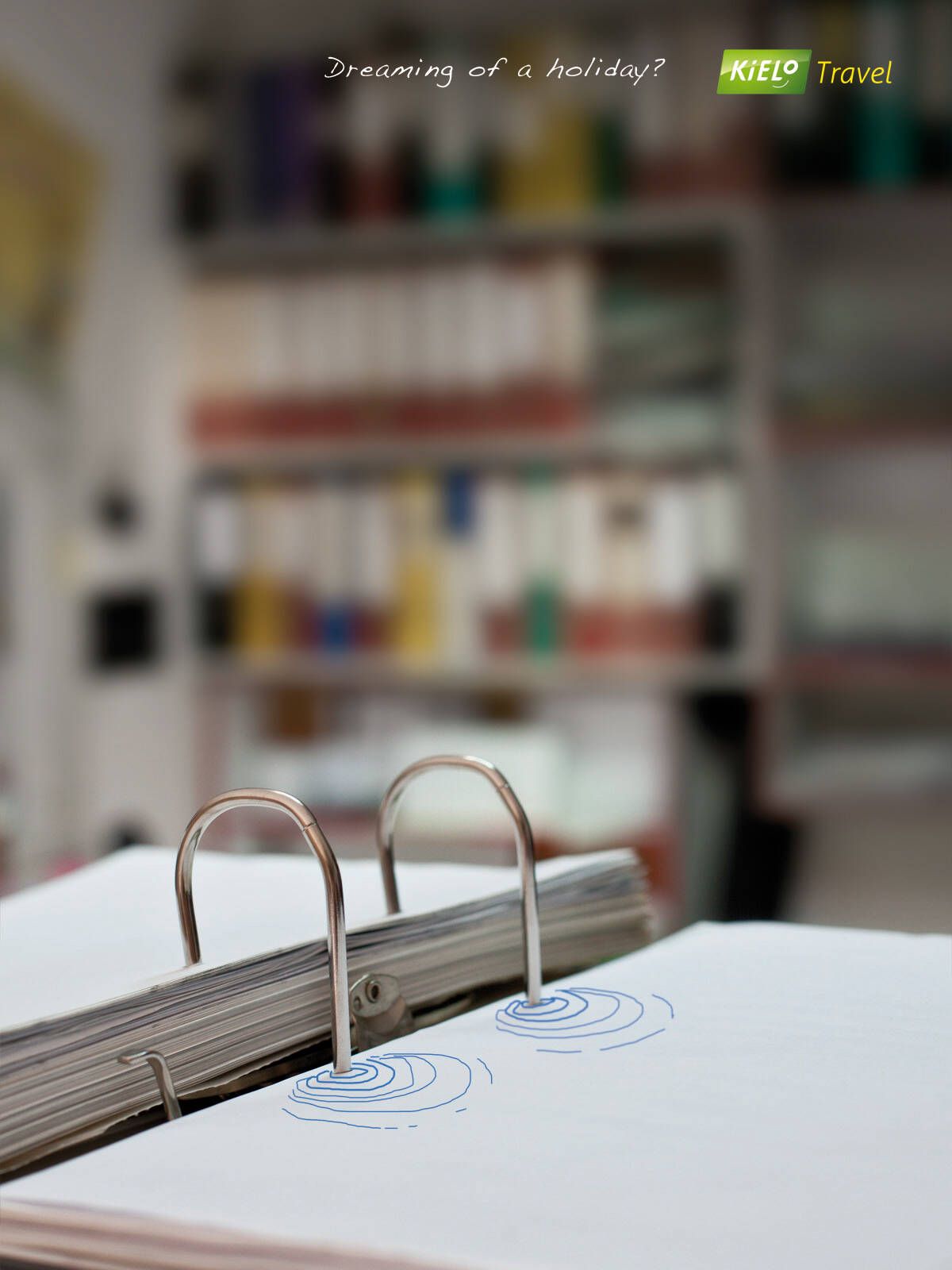 Image via Ads of the World™, by advertising agency NewMoment

The advertisement is a great example of setting the tone and creating that relatable feeling. Those who will feel addressed by this ad are the exact people who Kielo Travel’s target audience.

If you thought the St. Basil’s Cathedral was stunning as is, check out what the Schusev State Museum of Architecture created. This jaw-dropping print advertisement instantly attracts spectators.

Russia has a rich architectural heritage, which the Schusev Museum can tell you all about. With their ad, they urge Moscovites to visit the museum. 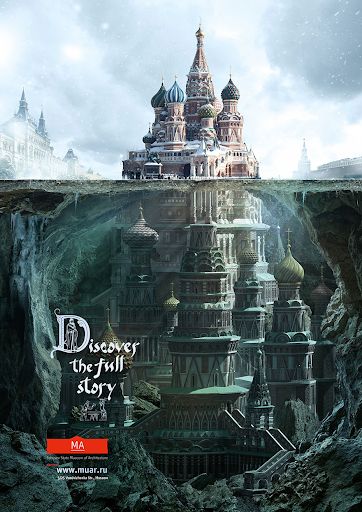 The visual demonstrates a whole story behind each known facade of a historic building. It’s an enticing ad where the creators at advertising agency Saatchi & Saatchi did a stellar job adding a plot twist to the well-known cathedral.

Getting something stuck in between your teeth is frustrating, to say the least. That’s precisely the feeling Colgate dental floss picks up on. Their clever ad suggests that with their product, nothing will get stuck in the first place. Not even the tiniest of seeds. 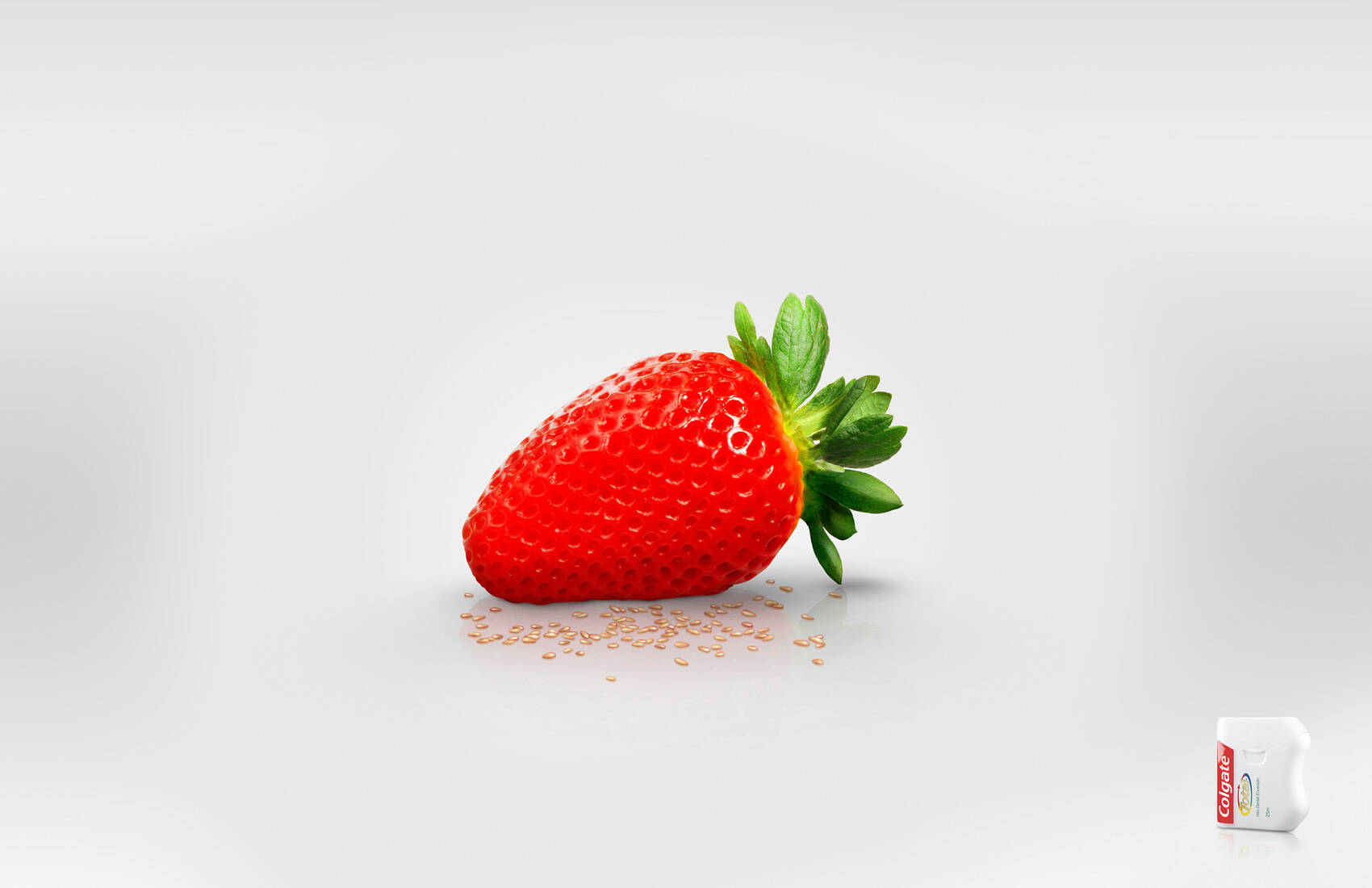 Image via Ads of the World™, by advertising agency VMLY&R

The ad from Colgate is minimalistic and clean, instantly showing the audience what it’s about. Although another ad in the campaign displays a bright green kiwi, we give them bonus points for using the main subject on brand colorwise.

A lollipop doesn’t have the best reputation. Too much sugar, bad for your teeth… What do you do if your brand sells them? You make it clear that you’re different.

Chupa Chups is the biggest brand of lollipops, and the creative advertisement below is famous for a reason. The unique visual of ants is unexpected proof that the lollipop is sugar-free. Add in the delicious-looking lollipop, and you have a winning ad on your hands. 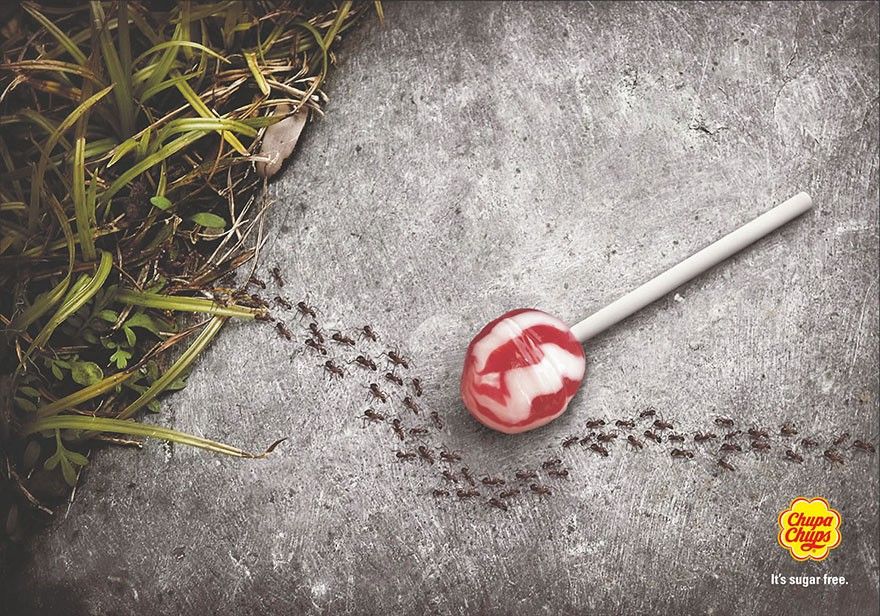 Instead of guilt-tripping customers about the health repercussions of too much sugar, this is a fun take on advertising a sugar-free alternative.

Some things instantly represent a specific place, like the Eiffel Tower does for Paris or the Queen’s guards for London. They are known for their uniforms, especially the big fluffy black hats. Eurostar hilariously used this in their print ad, advertising train trips from London to Paris. 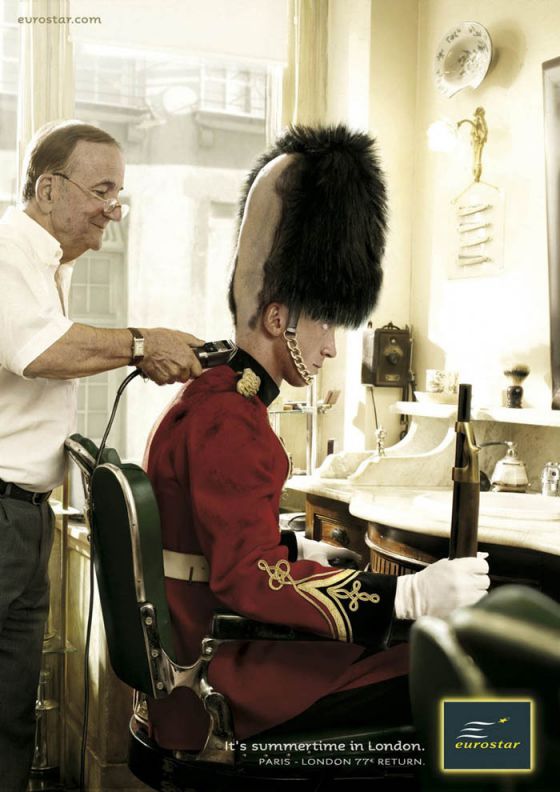 The visual is a bit absurd, but it’s funny and definitely grabs your attention, making you want to look twice.

The number of car advertisements that don’t show off their car is slim. Even slimmer are the ones that leave a lasting impression. One that does fit the bill is this one by Volkswagen.

This advertisement is all about the Touareg, an off-road, tough car that’s also luxurious. They represented this by taking a mountain goat shaved like a poodle, leaving us with the hilarious visual of an animal that can climb anywhere, looking like a fancy city dog. 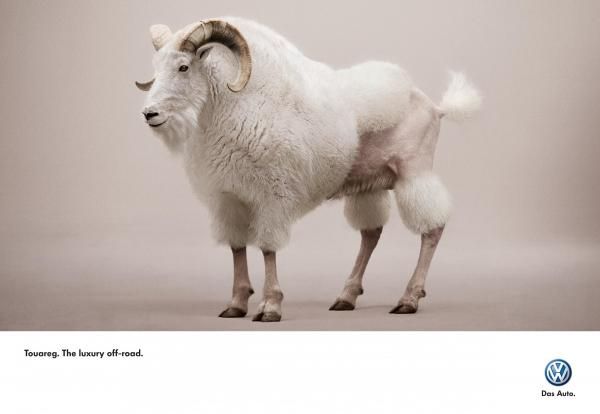 If you ask us, this is peak creativity.

One downside to print ads is that you’re limited in space. You only have one shot, so you better use the space you have wisely.

Norwegian Airlines utilized the space brilliantly. The Norwegian flag contains a hidden handful of other flags, depending on where you look. They outlined each flag, added the destination and the price. 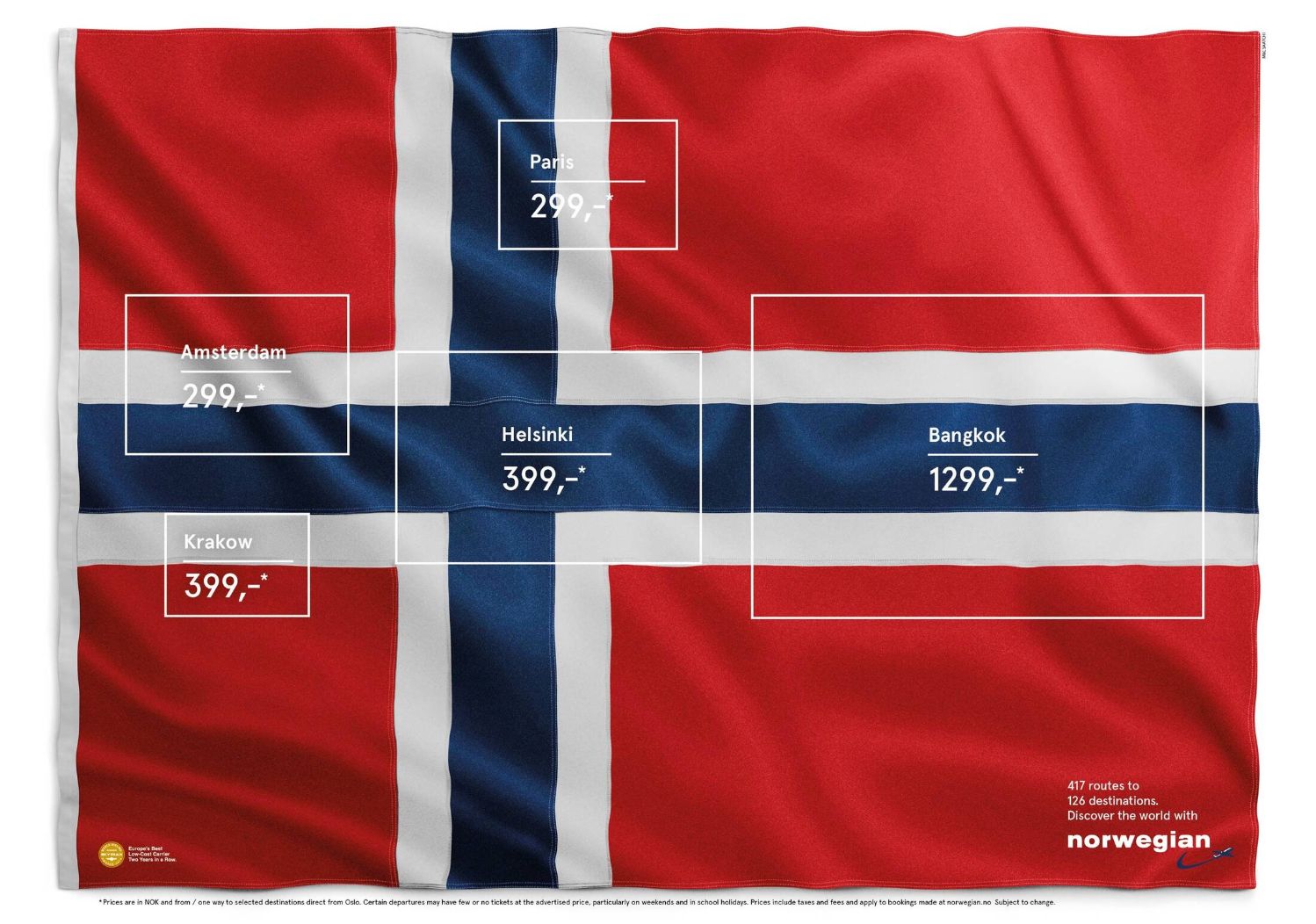 Image via Ads of the World™, by advertising agency M&C Saatchi

If one thing makes a print ad successful, it’s being clever, whether that’s with space, humor, design, or, in this case: all of the above.

Advertising for kids is a whole different ballpark. Stepping into the wondrous minds of little ones is a tough gig for any adult, but the clever marketers behind this Play-Doh advertisement did a pretty impressive job!

It’s colorful and playful, all while catering to the fantastic mind a kid can have. The tagline is visualized as if written with clay, adding to the recognizability of the brand. 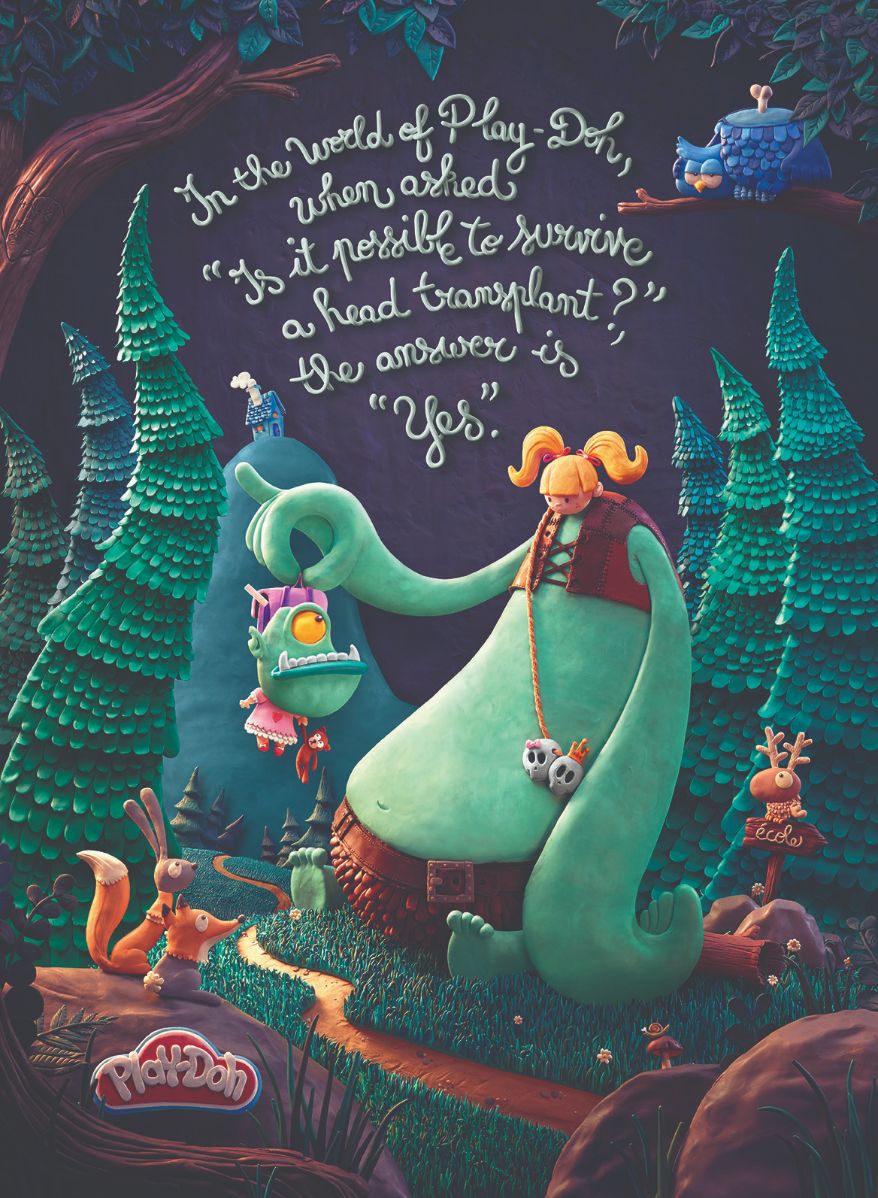 The longer you look at it, the more you see. It’s detailed, but it’s not overwhelming with the giant one-eyed monster in the middle. The ad brilliantly shows off the endless possibilities of the clay.

Here’s another advertising technique that may just work: don’t take yourself or your product too seriously. If there’s a brand that knows this like no other, it’s Marmite.

The savory food spread knows that they’re not everybody’s cup of tea. You either love it or hate it, but with the print ad below, Marmite is begging customers to at least not forget about it. This references that jar everyone has sat in the back of their pantry, long forgotten about. 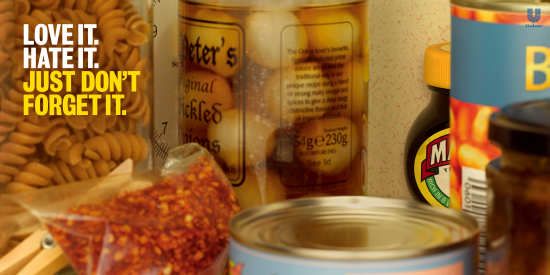 It’s a humorous advertisement, showing that they don’t take themselves too seriously. Additionally, it’s recognizable. Who doesn’t have a jar of something, whether that’s Marmite or not, sitting in the back of their pantry? This funny reminder to take it out is an excellent example of a print advertisement done right.

How do you let a destructive society like ours face the facts of climate change? Ask the WWF because they do a stellar job with their powerful advertisements, time and time again.

Case in point: this advertisement displaying disintegrating animals. It instantly highlights the primary problem, the endangerment of species, and the cause, desertification. 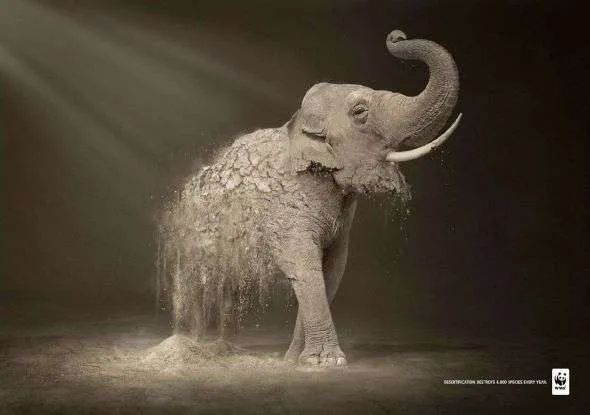 Fast food restaurant Kentucky Fried Chicken isn’t shy of a good advertisement. They know how to reel in their audience and have an impressively large fan base. The print advertisement below is the perfect example of their advertising game.

At first glance, you notice something off. And just like that, KFC has your attention. The alien-like mouth on the button is a bold move, but it works. 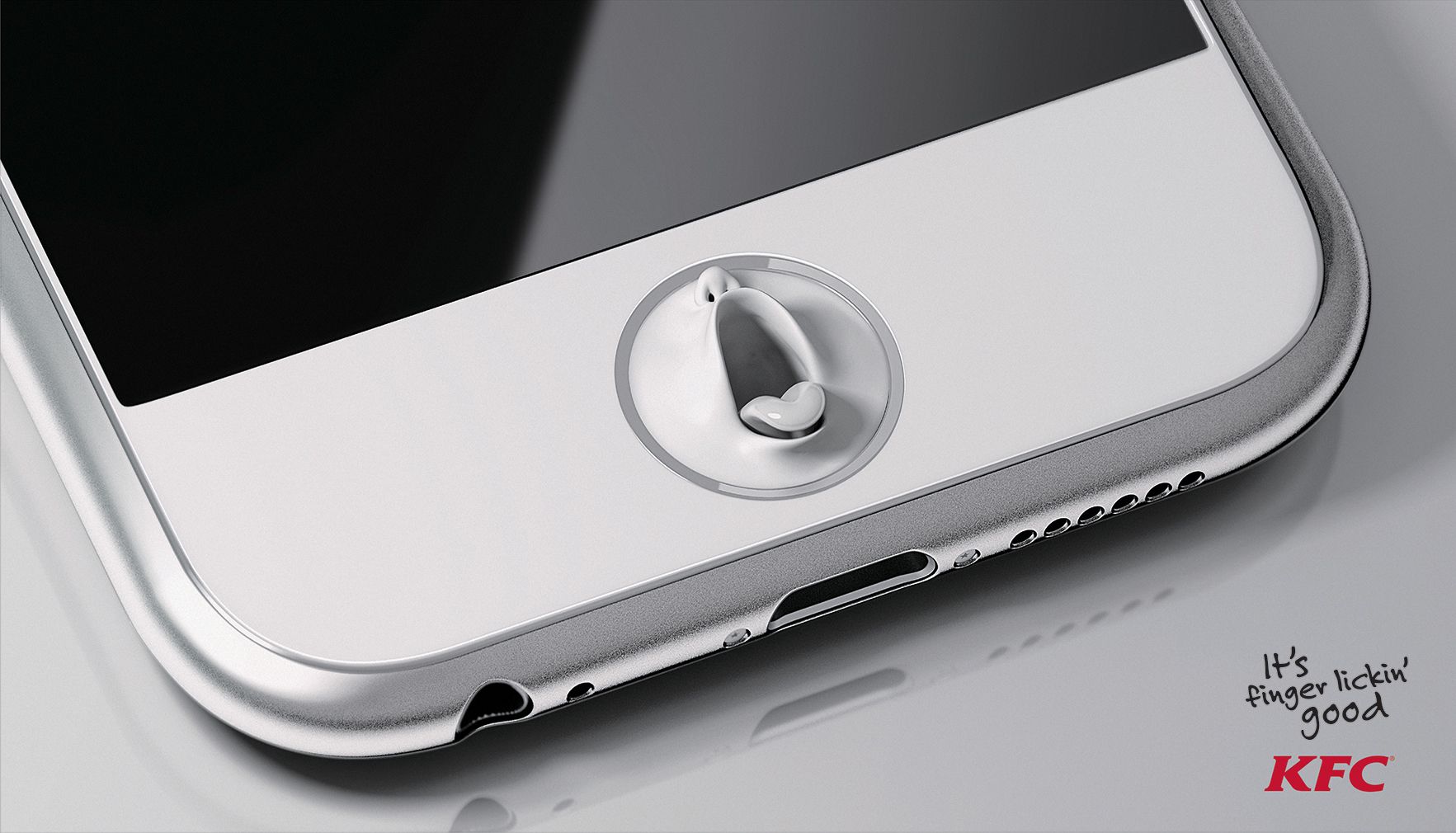 They didn’t even have to create a specific slogan for this ad campaign; they just stuck with their regular slogan: “It’s finger lickin’ good.”

These brilliant posters of pencils are a hit online, and understandably so. Although the advertisements stem from 2011, the campaign has recently sparked renewed attention, showing that good print ads are timeless.

Faber-Castell creates pencils in all the colors you can imagine. Their ad showcases a series of objects being sharpened into their colorful pencils. 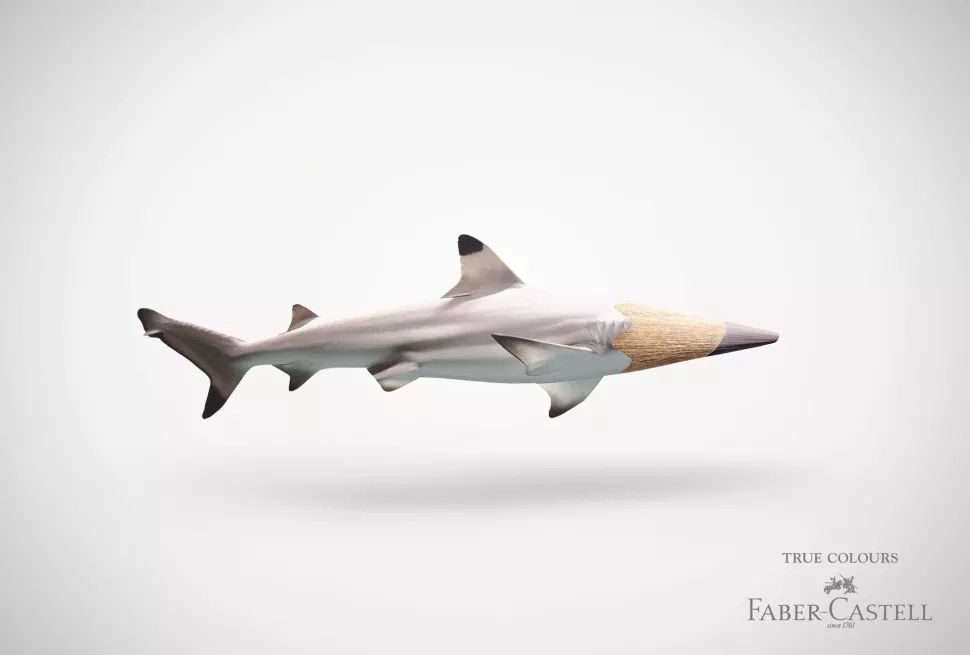 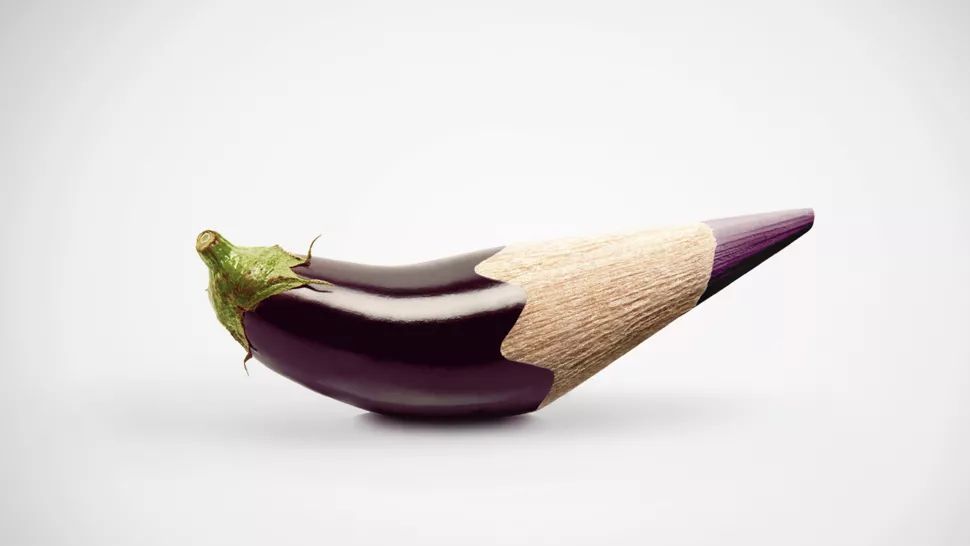 The campaign is created by German ad agency Serviceplan and does a stellar job at inspiring anyone to get drawing. Furthermore, it manages to show off a mundane product in a clever, creative way.

Ever heard the saying, “keep it short and simple?” It’s big in the marketing world, and with good reason. You only have a short amount of time to grab your audience’s attention and evoke some kind of emotion. Lego did it brilliantly with this ad.

While only a few of the Lego pieces are used in this advertisement, your brain instantly connects the dots and distinguishes The Simpsons. Fun fact: this allows for a so-called aha moment that makes it feel like we accomplished something independently, which comes with a snowball of positive effects. 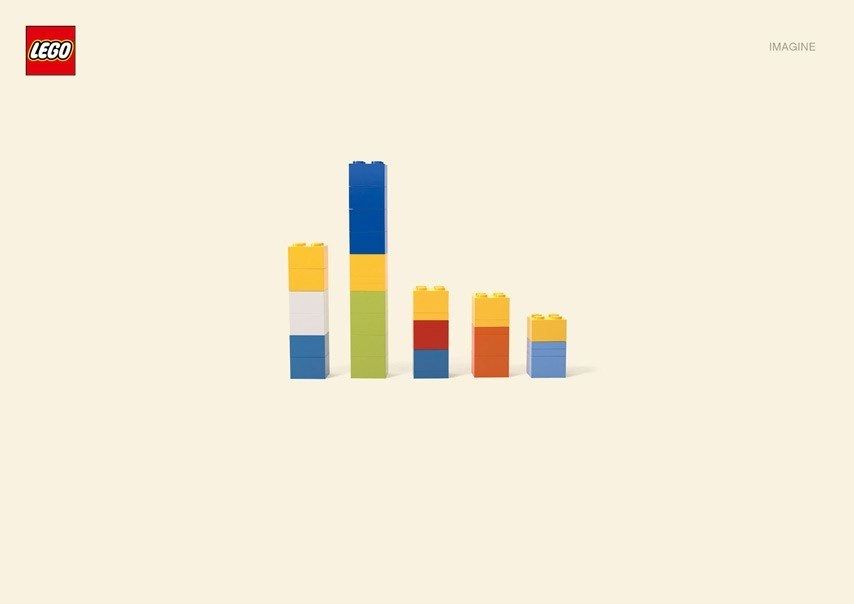 German advertising agency Jung von Matt created this print ad. With this ad series titled Imagine, they convey a hint of nostalgia in the most simplistic way.

Your cat may be cute and cuddly, but it’s still an animal with certain instincts and needs. Instead of going for the classic gorgeous feline in a stunning home advertisement, Whiskas took a different approach. 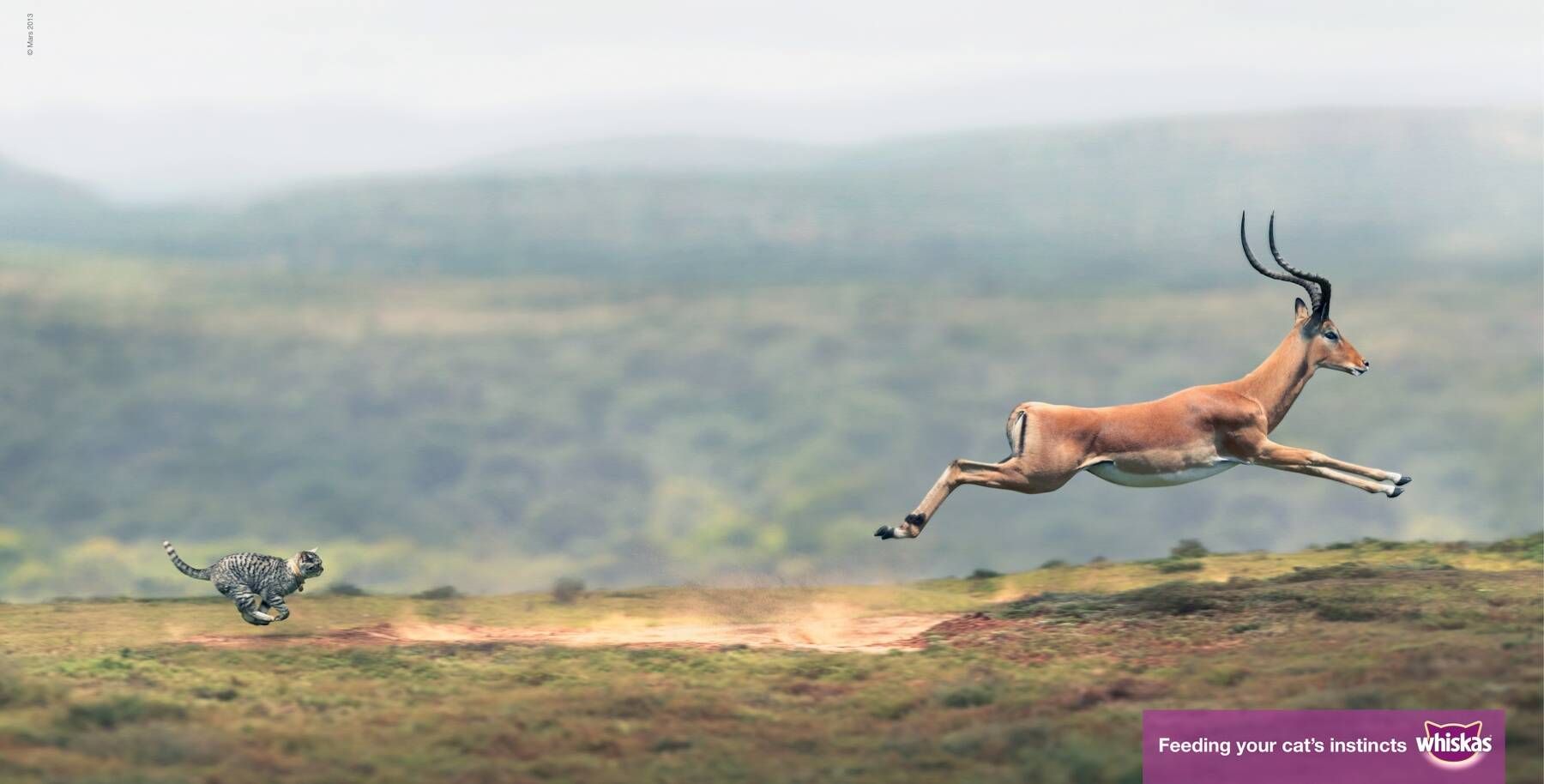 Image via Ads of the World™, advertising agency AMV BBDO

By digitally manipulating pictures of a house cat and the wild, the cat food brand makes it look like your average Pookie is a big cat running around African plains. This makes for stunning imagery with a humorous twist.

If these creative print ads can’t establish an answer to the question, “are print ads still effective?” we don’t know what could.

We hope these ads have inspired you to step up your print game and add the powerful tool to your marketing mix. Can’t get enough of clever print advertisements? Here are 25 more.

Simone is a writer, dividing her time between native Netherlands and 'home away from home' Malawi. Whenever not stringing words together, she's either on her yoga mat or exploring any off the beaten track she can find.